"He referred to my hands, if they're small, something else must be small. I guarantee you there's no problem. I guarantee it" Trump said in response to a comment by Marco Rubio in which he implied that Trump's weiner was small (this statement by Trump from the 11th gop debate on 3/2016 in Detroit MI).

"Boasting" is how Larry Flynt perceived Trump's comments, and now he (as well as several other groups) want to "document" Donald's size.

OK, so there is probably a zero chance that Trump will acquiesce to any of these request, and those making them likely know it, but that they have is pretty funny.

This reminds me of when Flynt derailed the speakership of Republican Robert Livingston. When the gop controlled House threatened to impeach Bill Clinton for receiving a Lewinsky, Flynt offered a million dollar reward for proof that any Repub member of Congress cheated on their wife. Which resulted in Livingston admitting an affair and resigning.

But back to the funny - according to Stephen Colbert the situation with Trump is even worse than what happened during the Lincoln/Douglas debates, when Lincoln said the following.

10/15/1858 was the date that the last (of 7) of the debates between Abraham Lincoln and Stephen Douglas took place (in Alton IL). Abe lost that election to the Illinois senate, btw. Here's hoping that the upcoming presidential election's results are similar. With Trump losing, that is. And/or with the Republican losing (if the nominee somehow isn't Trump).

Image: "He's always calling me Little Marco. And I'll admit he's taller than me. He's like 6'2, which is why I don't understand why his hands are the size of someone who is 5'2", said the soon to drop out out Rubio. 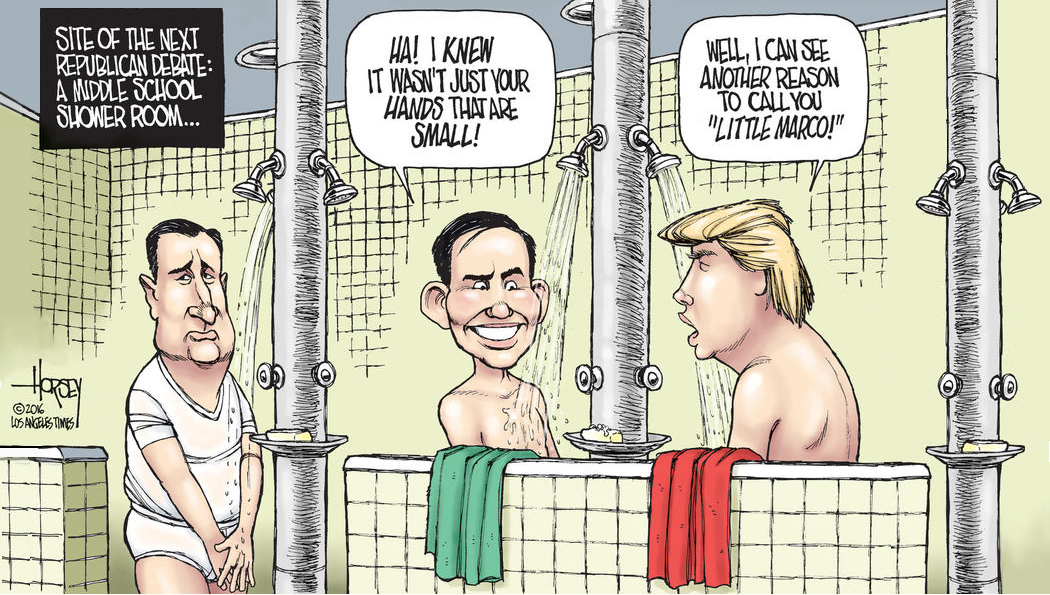 Posted by The Honorable, Esteemed And Distinguished Judge Dervish Sanders (A High IQ Individual) at 12:10 PM