Ordinarily I'd view a rumor like this one with suspicion. But I read recently that calling a story "fake news" is a "nonsensical talking point". Everyone should determine for themselves if a news story is legit or not (I assume). How? I'm not sure, but I think that if the story confirms your biases that means it is likely true.

With that in mind, when I heard that Melania Trump is a Russian spy, I went to Google and looked for a story that confirmed what I felt in my gut could be true.

There is also the fact that Melaina's father was a member of the Slovenian Communist Party. She is a Russian spy! It's all so obvious. All one has to do is connect the dots.

I also read that a former spy tells FBI that Russia cultivated Trump as an asset, provides evidence. According to the former spy, "there was an established exchange of information between the Trump campaign and the Kremlin of mutual benefit".

So, the homophobic religious bigot Pence will be prez when the Donald is prosecuted and convicted of treason, I assume? Unless Congressional Republicans decide they don't care. Which, so far, seems to be the case. 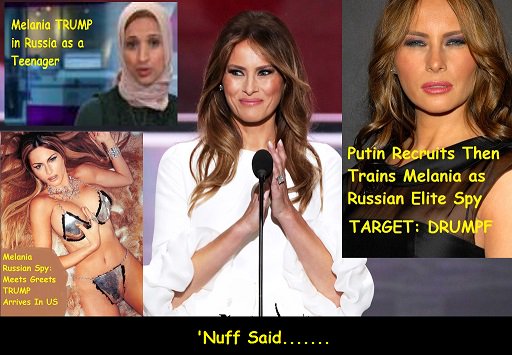 Posted by The Honorable, Esteemed And Distinguished Judge Dervish Sanders (A High IQ Individual) at 3:42 PM