So, according to Spicer "as far as bad guys go, the ranking is - boom, right up at the top, Hitler. Then Syria's Babar Al-Asshad. Three, I'm going to go pharaohs. And then I guess, chronologically, Jews take number 4".

The Pharaohs were bad guys because they enslaved the Jewish people, so why is it that Jewish people are #4 on the bad guy list, Sean? Proof, I think, that this administration is anti-semitic. I mean, firstly we have a White Nationalist in the position of Chief Advisor (Breitbart's Steve Bannon), now White House Press Secretary "apologizes" by naming Jews #4 of the all time Bad Guys? And he isn't immediately fired?

As far as Babar ruling Syria goes, I'm positive Sean is mistaken. Babar, being an elephant, was the ruler of the Elephant Land. A kingdom located in Southern Africa, not the Middle East! The ruler of Syria is named Bashar al-Assad (also, he is a human man not an elephant).

Image: Artist's rendering of King Babar (benevolent dictator of Elephant Land) and photograph of Bashar al-Assad (ruler of Syria and a bad guy). 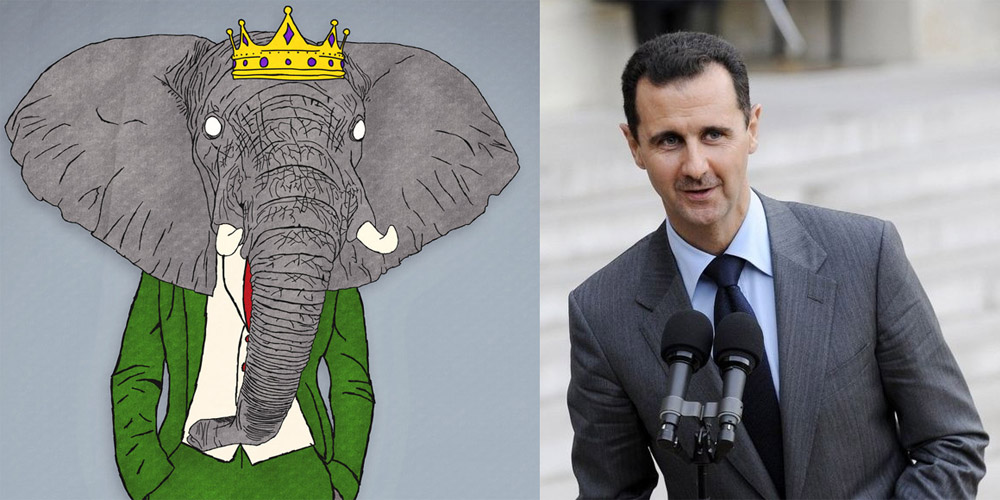 Posted by The Honorable, Esteemed And Distinguished Judge Dervish Sanders (A High IQ Individual) at 4:45 PM

Email ThisBlogThis!Share to TwitterShare to FacebookShare to Pinterest
Labels: Absurd