It's not me saying this, but the Conservative Horn News (although they do add the word "could").

The story goes on to note that "according to The Express, late Wednesday Kim Jong Un ordered the immediate evacuation of Pynongyang and, as of Thursday, North Korean authorities had already moved 25 percent of the capital's civilians out of the city".

Will WW3 be the result? I surely don't know, but obviously many people think it could. The Daily Mail reports "that searches for World War 3 hit their highest level since records started in 2004 this month".

Personally, I have been expecting Trump to fuck us all. All US citizens, of course. But (potentially) but the entire population of the world. Either war-wise or economically. So, YES, I think he could start WW3 in regards to North Korea. Apparently Trump supporters are enthusiastic about the prospect, however.

Image: Meme found at the top of the WYD blog. "Next" being a reference to Trump's illegal strike on a Syrian airfield (from which planes took off the next day). Assad was first and Kim Jong Un will be "next" (to be intimidated into behaving better by Trump). 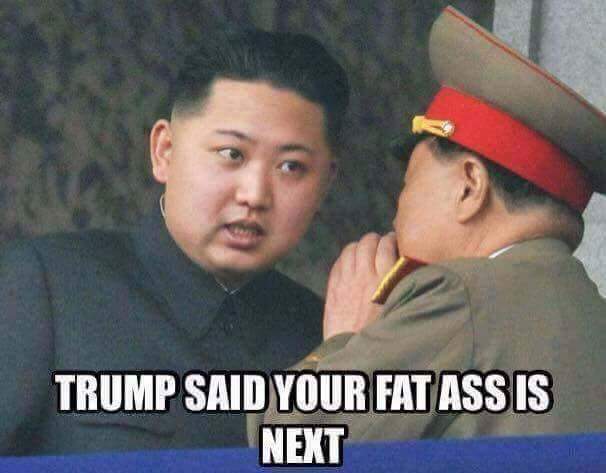 Posted by The Honorable, Esteemed And Distinguished Judge Dervish Sanders (A High IQ Individual) at 11:49 AM